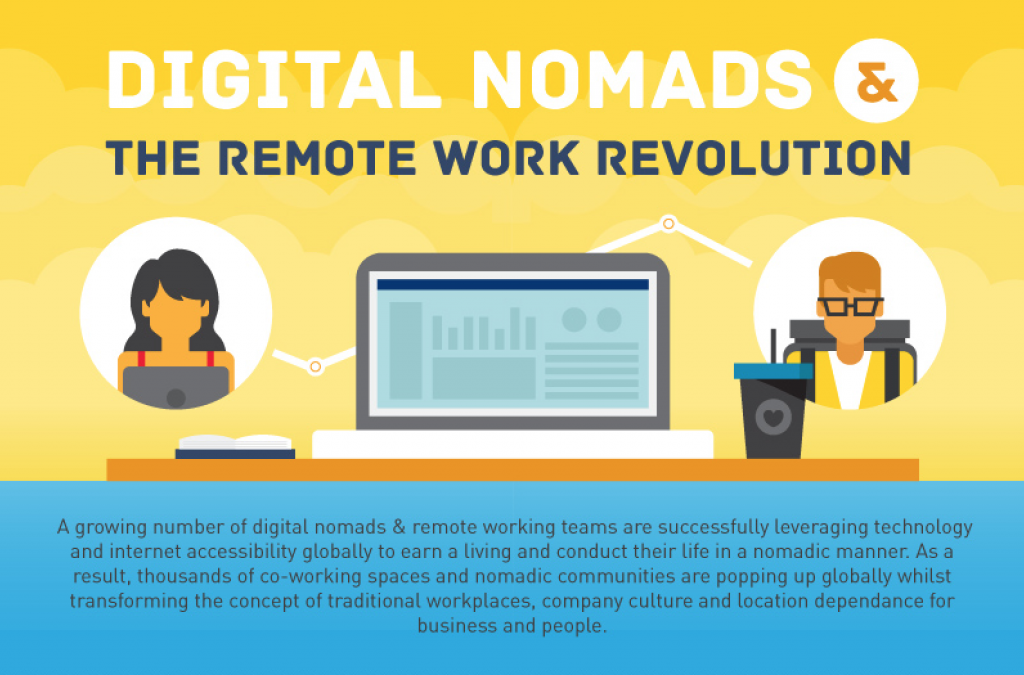 Ask yourself a question. If you didn’t have to go to work today, get dressed in that uncomfortable office attire, fight the traffic or go through a hectic same day-to-day commute, to sit at your desk while you complete that stressful project. If that wasn’t a key requirement of making a living and putting food on the table, would you still do it?

Many start-up entrepreneurs escape that environment by starting a new business. But apart from losing the suit for a t-shirt and swapping the cubicle for the bedroom or parent’s garage, the rest is pretty much the same old.

So how about adding location independence in the mix? Enter Digital Nomads – a growing cross-section of the working population who have leveraged the internet and technology to allow themselves to work or start-up almost anywhere in the world.

It’s the proverbial university gap year, but it never ends. It’s the “I’m going travelling” mentality, but instead of working in bars or doing odd jobs to fund the next plane ticket, they take their careers with them in their carry-on.

While some digital nomads themselves cringe at the term, it is used to reference a relatively new type of worker/entrepreneur who does their job on the go.

Arising mainly out of the tech and web-based industries, it is a philosophy of adventure and self autonomy. They choose the environments they wish to work in, make their own schedules, and spend as much time as possible taking in new cultures and experiences. They pick lower cost locations to bootstrap their business and then move or go back to the big tech hubs when investments and more specialised talent are needed. They leverage location independence to their advantage and the benefits are astonishing.

I created this infographic to explore this lifestyle more closely, looking at some of the hubs where nomads operate, why Bali is particularly appealing for remote work right now, and some of the major companies that are promoting and embracing the concept.

You can now work or run a business from virtually anywhere. London vs Bali case study

In this comparison a remote based start-up entrepreneur or worker will save around $6000 just on basic expenses for 3 months if he/she chooses to temporary relocate to Bali from London. On top of that, we are looking at 5–10 minute travel commutes, $6 massages, easy access to yoga, surfing and many other wellbeing improvements.

Freelancing and location independence as the new norm

The infographic reveals that in 1990 almost nobody was a freelancer or telecommuter. After all nobody had mobile phones, personal computers or the internet, so it made little practical sense. As computers became faster, laptops became more viable, and the likes of AOL brought the internet it to people’s homes, the first true remote workers began to emerge. By the early 2000s 15% of the working US population were considered freelancers. Today it is closer to 30%. It’s no secret that during this time internet connections have gotten cheaper and faster, and mobile technology has become more versatile and powerful. Prominent digital nomad Pieter Levels has recently compiled data that suggests there will be upwards of 1 Billion digital nomads by 2035, nearly 14% of the global population!

Of course for the nomadic lifestyle to work companies and employers also have to embrace it. In the future people won’t be quitting their job to become a digital nomad, it will be their job from the start. 60% of the Mozilla team (those behind the Firefox web browser) are remote. Popular social news website BuzzFeed is 50% remote. Some companies have even taken the plunge to become 100% remote or “fully distributed”. For example all 400 plus employees at Automattic (the group behind WordPress) choose their own work environment. Toptal, a website that connects Freelancers with businesses and startups, leads by example by also have a fully distributed workforce.

It’s easy to see why people would strive for this kind of autonomy. Although some really do like their jobs, let’s be honest working is a necessary evil for most of us. If we can spend more time with our families and friends, have the freedom to travel anywhere in the world, and break free from the shackles of the 9 to 5 system, we’d be stupid not to.

A survey of 2,000 people conducted earlier this year by FlexJobs suggests that remote work improves relationships, health and overall happiness. Every boss knows that a happy worker is a productive one.

There are other clear advantages for partial and fully distributed companies. If you don’t need everyone to work in an office, you don’t need to own or rent an office. You also don’t necessarily need to buy and maintain computer equipment or pay for electricity and utilities. These savings can be reinvested in the business, passed on through wages and passed on to the consumer. Companies who don’t restrict themselves to geographic locations also have access to a much wider pool of talent. That person living across the country or in another country altogether no longer has to uproot their life and relocate just so they can sit at a desk at HQ.

The digital nomad lifestyle is really starting to find its stride, with many companies providing tools and services that make the process easier for both the nomad and the employer. Timedoctor and Slack can help with time management and productivity. Managing multi-currency accounts via Revolut and money transfers with Transferwise make global banking a breeze. Remote teams can chat through Sqwiggle and Horn, while individuals can arrange co-living and travel destinations through Roam and Nomadlist. In fact, Bruno Haid from Roam has a fair point that this fictional global co-living lifestyle should be accessible to everyone.

You can now work from virtually anywhere

Co-working spaces (a sort of outgrowth of the internet cafe) are also starting to pop up all over the world, as nomads look for like minded people as they pass through on their travels. Dave from the third floor may have a portable golf mat next to his desk, but has he ever been to the Hubud bamboo office in Bali?

As we refine the ways in which nomads work and communicate, the wider world is also about to get much more efficient as well. The internet is only going to get faster. Our ability to travel great distances is also going to become more efficient, with driverless cars on the horizon. Then there’s Elon Musk’s Hyperloop which will take us from Los Angeles to San Francisco in 45 minutes. Musk even has his sights set on commercial space travel within the next decade. Will the first common man on the moon be a digital nomad?

Technology was always supposed to be about making our lives easier and more fulfilling. The rise of the digital nomads represent a milestone where this couldn’t be more true. Exciting times are ahead of us.