First thing in the morning, the couple met with an organization called Stemettes, a UK and Ireland initiative which aims to break down the various gender stereotypes that keep many young girls from pursuing a career in STEM.

Slipping on a couple of virtual reality goggles, the prince and his princess, who both consider themselves feminists, had a look at what the young girls are currently learning.

“I love being here to see this on International Women’s Day. You’re using your brain in a really challenging way,” she said, according to The Telegraph.

“You must have brains the size of a planet,” Prince Harry added.

“And you can’t just come in today, do this, and leave. You’ve got to carry it on.”

After listening to the career dreams of several young girls, Markle praised their commitment and passion.

“It’s cool that you’re so interested in tech,” she told a group of students.

After hopping from group to group to see what the next generation of scientists were up to, Markle and her prince sat down to listen to a few speeches.

Aspiring army officer engineer Lauren-Mae Sparrow, age 13, asked, “Should our gender define who we are and what jobs we are allowed to do? I think not.”

Markle agreed and said, “A woman in the face of society is seen as one who has to be pretty, thin and quiet. The one who dares to fly in the face of all these stereotypes is the best kind of role model a young female can have.”

Founder Dr Anne-Marie Imafidon was hopeful the royal visit would have a lasting impact.

“You can’t be what you can’t see. To see her do it and see that she’s enjoying it, it sends a message. In the same way that when she wears a dress we all buy it, here she’s picked up a Makey Makey [an inventing kit] so let’s try it.”

“We could follow a different kind of fashion for once.”

PrevPreviousCloud 101: Why Transition to the Cloud
NextThe Nonprofit Guide to Cloud Data MigrationNext 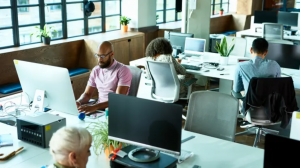