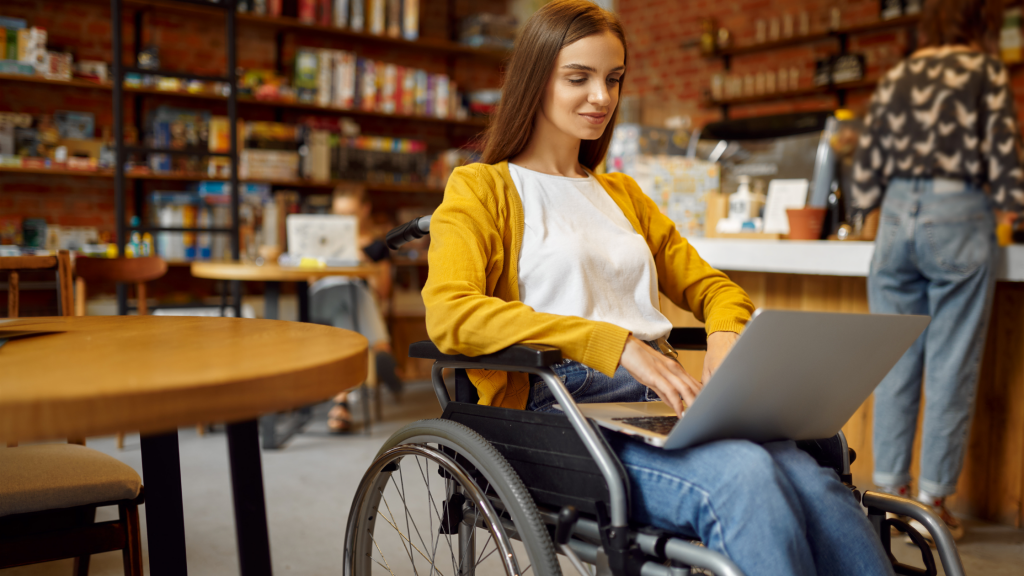 After becoming paralyzed in 2009, Beka Anardi never thought about working again. That is, until the pandemic hit.

As millions of people began working remotely, Anardi realized she could resume her career as a recruiter. She sent her resumé to a few people in her network at the end of last year and was employed within a matter of weeks. The 41-year-old now works full-time from her house in Bellevue, Washington, where she can comfortably navigate her wheelchair, avoid the hassle of commuting and take care of her bodily needs in the privacy of her own home.

“If you had asked me two years ago if I would ever return to work, I would’ve said no. It never entered my mind as a possibility until everyone was working remote,” said Anardi, who lost the use of her legs during the birth of her first child, after which doctors discovered and removed a tumor that had been pressing against her spine. “It’s a much more comfortable situation when you can interview over Zoom and people don’t see a wheelchair as the first thing about you.”

Anardi is part of the second-largest minority group in the US — adults with disabilities. The 42.5 million disabled Americans make up 13% of the civilian population, compared with the nearly 19% that is Hispanic and the almost 12% that’s African American, according to 2021 Census data released on Sept. 15. After suffering some of the worst job losses during the initial phase of the pandemic, people with disabilities are now benefiting from the remote-work trend it triggered. Advocates hope they will continue to reap such rewards, even as companies demand that employees return to the office.

Remoting In Is Working Out

There are signs the disabled employment boom could last. Companies are struggling to fill millions of open positions and are expanding their search to reach untapped pools of workers. The tight-as-a-drum labor market gives employers an incentive to maintain the remote-work benefit for disabled employees, which also helps companies diversify their workforces.

Adults with disabilities have rarely been employed in such high numbers, thanks in large part to the removal of one of the biggest obstacles to having a job — commuting. About 5.6 million disabled men and women ages 16-64 were employed in August — a slight dip from June’s record but still historically elevated, according to the Bureau of Labor Statistics. The group’s labor-force participation rate — the share of the population that is working or looking for work — was 37.6% in August, up nearly five percentage points from April 2020 and hovering close to a record in data back to 2008, according to an analysis by the Kessler Foundation and the University of New Hampshire.

By contrast, the labor-force participation rate of working adults without disabilities has risen almost four percentage points in the same period.

Bouncing Back From Covid

All of this has made Thomas Foley a lot more popular these days. As executive director of the National Disability Institute, he’s seeing more interest in the nonprofit’s employment services, which can help companies design inclusive hiring and retention practices. That may mean adding imagery to job postings showing someone in a wheelchair or with a service dog, or having technology that reads what’s on a screen for a person like Foley, who is blind.

“We see it all the time, a template that may be in place for 15 to 20 years. They really need to lift 40 pounds? They really need a driver’s license?” Foley said. “You want to make sure there’s nothing in job descriptions or ads that’s going to put people off.”

There’s reason to believe the disabled population figures, which don’t include those with long Covid, are higher. The symptoms of long Covid are still emerging and are difficult to diagnose, but most sufferers typically experience fatigue, shortness of breath and difficulty concentrating, also known as “brain fog.” The Centers for Disease Control and Prevention in July 2021 said long Covid can be considered a disability under the Americans With Disabilities Act, but the Census survey doesn’t ask about it.

A Brookings Institution study estimates that long Covid is keeping as many as 4 million Americans out of work. People afflicted with long Covid need policies and accommodations similar to those “we’ve been making for people with disabilities or chronic illness for years,” said Susanne Bruyere, director of the Yang-Tan Institute on Employment and Disability at Cornell University.

A disability can affect mobility and cognition but also the ability to see, hear, live independently and perform self-care, such as dressing or bathing. And as those with disabilities know full well, physical or mental handicaps can make it tough to find a job. For Bela Gaytan, it was hard to advance her career until remote work became more commonplace. Between her full-time job in instructional design and part-time work as a social-media manager, she’s more than quadrupled her pre-pandemic earnings.

Gaytan, 46, who suffers from chronic pain and has a host of medical issues that cause cognitive and mobility impairment, used her newfound earnings to buy more ergonomic equipment for her desk and medical braces that insurance wouldn’t cover. “I really went all out trying to make myself more comfortable,” Gaytan said. “I’m still in shock sometimes that I can buy things that will make my life better without worrying if I’ll have enough money to pay rent.”

Just because a disabled person is working doesn’t necessarily mean that the conditions are fair. There’s a nationwide effort to crack down on the labor certificates, allowed under the Fair Labor Standards Act of 1938, that let companies pay people with disabilities a subminimum wage, but many employers still use them.

Some US employers, meanwhile, are hell-bent on getting workers back in the office now that Covid concerns have largely abated. “Unfortunately, we’re hearing more about companies saying that’s what we did during the pandemic, and now that that’s over, we’re going ‘back to normal,’ which is in-person work,” said Daniel Van Sant, director of disability policy at the Harkin Institute, a research center at Drake University in Iowa. “It’s disregarding any of the successes people were having working from home.”

Maureen Dunne, a consultant and advocate for neuro-diverse workers — which includes people with autism, mental illness and other neurological or developmental conditions such as ADHD and dyslexia — is more optimistic. She’s seen an increase in client interest, especially as many employers embrace diversity and accessibility and are more open to flexible work options.

“You can hire someone and check a box, but to find these models that are really working, you need to put neuro-diverse people in meaningful roles that are truly taking that organization forward,” said Dunne, who has a child with autism. “I do see more interest and movement in that direction.”

PrevPreviousYes, the Hybrid Workplace Can Work
NextMicrosoft Places app will manage ‘fusion of digital and physical space’ for hybrid workNext